Focus on EI: Examples of the Use of Gestures and Problem Solving in Early Intervention 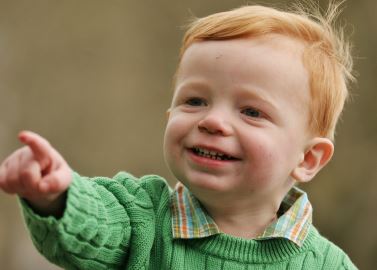 Picture if you will, a small child sitting in a highchair.  A brightly colored toy sits just out of reach. As you observe, the child makes eye contact with you, reaches for the toy, then looks back at you.  What do you do?
Chances are you give the toy to the child! This child did not use words to let you know what they wanted, and yet you figured it out!  Maybe you’re a mind reader…more likely you have picked up on the nuances of nonverbal communication.
What is nonverbal communication?  In simple terms, it’s the ability to convey a thought or idea to another person without talking. We use nonverbal communication every day – we raise our fingers to our lips to signal quiet, we smile and wave to a friend to say hello, and we put our hands on our hips and frown to signify displeasure. Nonverbal communication takes many forms, including (but not limited to) eye contact, facial expression, touch (haptics), and gestures.
Nonverbal communication is so much a part of our “language” that babies pick up on it very early on! Take the child in the example above, she used nonverbal communication (in the forms of eye contact and conventional gestures) to gain your attention, regulate your behavior, and get her wants met.  That’s pretty sophisticated problem solving!
This article from Science Daily gives us a preview of recent research conducted by Patricia Miller and Gina O’Neill.  To summarize, Miller and O’Neill gave children (aged 2-5) cards that were printed with different colored shapes.  The children were asked to sort the cards first by color, then by shape.  The findings suggest that gesturing proved to be a better indicator of success than other factors, including the age of the child.
Miller points out that even adults use more gestures when they are concentrating on a particular task.  She states that, “When our minds are overflowing we let our hands take on some of the cognitive load.”  One key bit of information gleaned from the study is that gestures help us process and think. So it’s not surprising that children who gesture demonstrated improved problem solving skills.
I spent several years working in early intervention (birth to three) programs as a speech and language pathologist.  I primarily worked with children with delayed speech and language skills.  Some of those children also had delayed nonverbal communication, common with children diagnosed with Autism Spectrum Disorders (Colgan et al, 2006).  Some of the children on my caseload displayed nonverbal communication skills that were typical of same age peers. And some of those children developed a proficiency in nonverbal communication!
One such child, Timmy* (2 years old), had significant delays in his expressive language skills.  Timmy appeared to have poor motor planning skills as they relate to speech and language production.  He developed an extensive system of gestures that included both conventional gestures (e.g., waving, come here) and invented gestures (e.g., tapping his fist to his shoulder for “baseball”).  Timmy was fantastic at making his wants and needs known and problem solving different methods of communication when he was not initially understood.  For example, one day Timmy was helping his dad while his dad was fixing the porch.  Timmy’s dad allowed him to hammer some nails into a scrap piece of wood.  When he had run out of nails, Timmy used the American Sign Language (ASL) sign for “more” then pointed to his fingernail to indicate that he wanted “more nails!”
When working with very young children with expressive language delays, Speech and Language Pathologists often recommend the use of ASL to facilitate communication.  Why?  Children are capable of using gestures much earlier than they are capable of saying words.  In addition, the introduction of ASL often decreases frustration in children who are not yet using words and increases their success in communicating with others.  In my experience, increased communicative success via nonverbal means often leads to increased verbal communication attempts!
I once worked with another 2-year old boy, David*, who was not using many spoken words.  I spoke with the parents about introducing “a few ASL signs” (more, all done, eat) to alleviate the frustration that this child was experiencing.  Unbeknownst to me, David’s mother had a relative with a hearing impairment and was fluent in ASL.  She began using ASL in combination with spoken language in the home!  David immediately began using basic ASL signs to make wants and needs known.  Once his frustration decreased, he began pairing spoken words with his signs. Eventually the signs faded entirely and David was speaking in sentences typical of other children his age!
David had an amazing ability to use ASL, a language based upon gestures!  He provides us with another example of the problem solving skills exhibited by children who use gestures.  Although David used language that was often appropriate for age expectations, his articulation skills remained somewhat below those of same-age peers.  One day, while working with David, he looked at me and said “Ooge.”  I asked him to repeat because I wasn’t sure what message he was trying to convey.  After several failed attempts, he repeated “Ooge,” this time paired with the ASL sign for “orange.”  Although he was no longer using signs with his spoken words, David was able to figure out that he could bring the signs back into his interactions when communication breakdowns occurred!
Miller and O’Neill have found that children who use gestures demonstrate improved problem solving skills.  Both Timmy and David developed a strong use of gestures to compensate for reduced expressive language skills.  Both Timmy and David demonstrated excellent problem solving skills as well!  They are just two examples from my early intervention past that align with the findings of the Miller and O’Neill study and I’m sure if I looked back, I’d find many more!

*Names have been changed in the interest of privacy.

Carrie Manchester is an ASHA certified speech and language pathologist and is a Certified Early Intervention Specialist in the state of Massachusetts.  She currently provides speech and language services in a public school setting, working primarily at the early childhood level (preschool and kindergarten).  Prior to transitioning to the schools, she has spent many years working in early intervention settings and providing trainings to childcare professionals.  Carrie is the author of the speech and language blog Carrie’s Speech Corner.  She can be reached via email at cmanchester57 at gmail dot com