Laws Mandate Education For Would-Be Parents About Down Syndrome 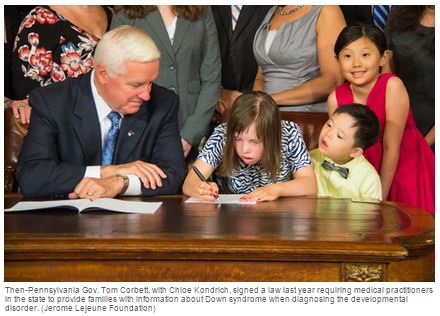 [Source: Disability Scoop]
PITTSBURGH — Doctors warned the Kondrich family that their daughter would be different.
They were right.
In the past year alone, Chloe Kondrich has hung out with rock stars in Manhattan; visited with Pennsylvania Gov. Tom Wolf; posed for photos with members of Congress; and just recently traveled to Harrisburg, by invitation, to meet with Pennsylvania’s Secretary of Education Pedro A. Rivera.
One other thing, too: Chloe, who has Down syndrome, had a law named after her.
Last August, former Gov. Tom Corbett signed a bill that requires medical officials to provide accurate, up-to-date information to parents the moment a practitioner makes a Down syndrome diagnosis, usually during a prenatal exam. The Prenatal Education Act is known as “Chloe’s Law.”
“Quite a year,” said Chloe’s dad, Kurt Kondrich, of Upper St. Clair as Chloe sat nearby with her arm around her dog, Tina. “It’s hard to keep up with her.”
A year later, the law is getting mixed reviews.
Chloe and the law have helped to raise awareness, officials said. But some experts worry that the information provided to families is lacking.
“What is available on the state’s website is still outdated,” said Dr. Kishore Vellody, medical director of the Down syndrome Center at Children’s Hospital of Pittsburgh of UPMC. “So I don’t know that the info is really improved at all.”
Read the Rest of this Article on Disability Scoop