By: Lee A. Wilkinson, PhD, NCSP
Introduction
The dramatic increase in the number of school-age children identified with autism spectrum disorders (ASD) has created a pressing need to design and implement positive behavioral supports in our schools’ classrooms. Autism is much more prevalent than previously thought, especially when viewed as a spectrum of disorders. For example, recent estimates suggest that ASDs now affect approximately 1 to 2 % of the school-age population (Wilkinson, 2010). As a result, school-based support professionals are now more likely to be called on to consult with teachers and parents on how to manage the behavioral challenges of learners with ASD than at any other time in the recent past.
Although there is no single effective behavioral intervention, evidence-based strategies such as self-management have shown considerable promise in addressing the attention and concentration difficulties and poor behavioral regulation of learners with ASD (Callahan & Rademacher, 1999; Wilkinson, 2005, 2008, 2010). This article illustrates the use of self-management as a positive and practical classroom strategy for enhancing the independence, self-reliance, and school adjustment of students on the autism spectrum.
Self-Management
A great deal of research has accumulated over the past two decades that demonstrates the effectiveness of teacher-managed interventions in responding to children’s learning and behavioral challenges. Research indicates that interventions involving the external manipulation of antecedents and consequences have, in general, been successfully applied to a wide range of classroom problems (Gresham, 2004; Stage & Quiroz, 1997). However, there are limitations to these management approaches. For example, teacher-directed programs focus more on controlling behavior than on helping students acquire the skills needed to self-regulate their behavior and achieve greater levels of independent functioning. In addition, these behavior management techniques can be intrusive and require teachers to expend valuable instructional time applying external contingencies (Shapiro & Cole, 1994).
Self-management strategies are an alternative to teacher-managed contingency procedures for students with and without exceptionalities. They have been implemented effectively for children with attention-deficit/hyperactivity disorder, learning disabilities, disruptive behavior disorders, and autism spectrum disorders (Barry & Messer, 2003; Hoff & DuPaul, 1998; Callahan & Rademacher, 1999; Lee, Simpson, & Shogren, 2007; L. K. Koegel, Harrower, & Koegel, 1999; McDougall, 1998; Odom, Brown, Frey, Karasu, Smith-Canter, & Strain, 2003; Shapiro, Miller, Sawka, Gardill, & Handler, 1999; Rock, 2005; Todd, Horner, & Sugai, 1999; Smith & Sugai, 2000;; Wilkinson, 2005).
Definition of Self-Management
Self-management generally involves activities designed to change or maintain one’s own behavior. In its simplest form, students are instructed to (a) observe specific aspects of their own behavior and (b) provide an objective recording of the occurrence or nonoccurrence of the observed behavior (Cole & Bambara, 2000; Shapiro & Cole, 1994). This self-monitoring procedure involves providing a cue or prompt and having students discriminate whether or not they engaged in a specific behavior at the moment the cue was supplied. Research indicates that focusing attention on one’s own behavior and the self-recording of these observations can have a positive “reactive” effect on the behavior being monitored (Cole, Marder, & McCann, 2000).
Advantages of Self-Management
One of the prominent features of students with ASD is an absence of, or a poorly developed set of self-management skills. This includes difficulty directing, controlling, inhibiting, or maintaining and generalizing behaviors required for adjustment without the external support and structure from others. Learning to engage in a positive behavior in place of an undesirable one can have the collateral effect of improving academic performance and social adjustment. Self-management has the advantage of teaching students to be more independent, self-reliant, and less dependent on external control and adult supervision (Callahan & Rademacher, 1999; R. L. K Koegel et al., 1999; Lee et al., 2007; Odom et al., 2003; Wilkinson, 2008, 2010).
Many children with ASD do not respond well to typical “top down” approaches involving the external manipulation of antecedents and consequences. Self-management provides students with an opportunity to participate in the development and implementation of their behavior management programs, an important consideration for many students with ASD.
Self-management interventions can also help minimize the potential for the power struggles and confrontations often experienced with the implementation of externally-directed techniques.
Designing a Self-Management Plan
The following steps provide a general guide for preparing and implementing a self-management plan in the general education classroom. They should be modified as needed to meet the individual needs of the student.
Step 1: Identify preferred behavioral targets. The initial step is to identify and operationally define the target behavior(s). This involves explicitly describing the behavior so that the student can accurately discriminate its occurrence and nonoccurence. For example, target behaviors such as “being good” and “staying on task” are broad and relatively vague terms, whereas “raising hand to talk” and “eyes on paper” are more specific. When developing operational definitions, it is also useful to provide exact examples and nonexamples of the target behavior. This will help students to recognize when they are engaging in the behavior(s).
While self-management interventions can be used to decrease problem behavior, it is best to identify and monitor an appropriate, desired behavior rather than a negative one. Describe the behavior in terms of what students are supposed to do, rather than what they are not supposed to do. This establishes a positive and constructive alternative behavior. Here are some examples of positive target behaviors: 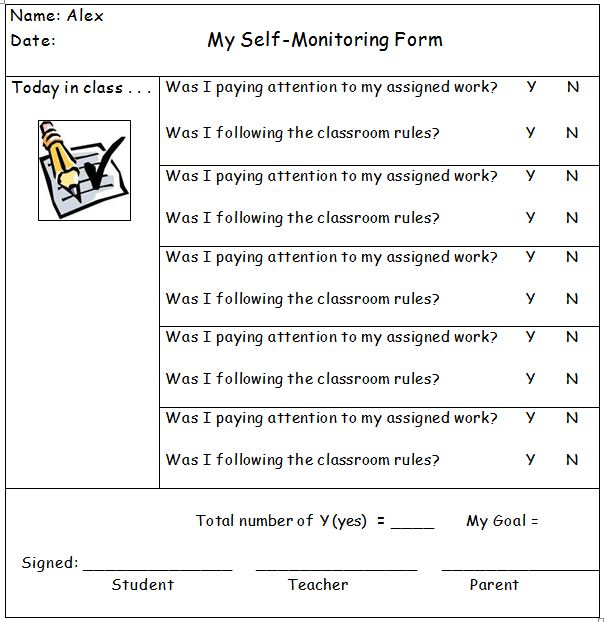 Note: Adapted with permission from Wilkinson, L. A. (2010). A best practice guide to Assessment and intervention for autism and Asperger syndrome in schools. London: Jessica Kingsley Publishers.
The self-monitoring intervention continued for approximately three weeks during which time Alex’s teacher continued to collect performance data. A “treatment integrity” checklist was also completed each day to ensure that all components of the self-monitoring intervention were implemented as planned.
When his teacher determined that Alex’s task engagement and compliant behavior had increased to 90%, the procedure was slowly faded by increasing the intervals between self-monitoring cues (e.g., 10 minutes, 15 minutes, and 20 minutes). Alex’s teacher continued to monitor the target behaviors to determine whether additional support (e.g., booster sessions) was needed to maintain his performance. The goal of the final phase of the plan was to eliminate the prompts to self-monitor and instruct Alex to keep track of his “own” behavior. Home-school communication continued via a daily performance report to help maintain his self-management independence and positive behavioral gains. Periodic behavioral ratings by Alex’s teacher indicated that task engagement and compliant behavior remained at significantly improved levels several weeks after the self-monitoring procedure was completely faded.
Discussion and Limitations
Despite the potential benefits of self-management, this strategy is not without some limitations. Self-management procedures are intended to complement, not replace, positive behavioral support (PBS) strategies already in place in the classroom. Likewise, they should not be considered as rigid and inflexible procedures, but rather a “framework” in which to design and implement effective interventions to facilitate the inclusion of students with ASD and other disabilities in general education settings. For example, the self-monitoring plan described in Alex’s case vignette represents only one of the many possible ways that self-management procedures can be utilized in the classroom.
Shifting from an external teacher-managed approach to self-management can present some obstacles. As with other interventions, self-management strategies can fail due to student and teacher resistance, poor training, and/or a lack of appropriate reinforcement (Cole et al., 2000). Successful implementation of self-management procedures requires that students be motivated and actively involved in the self-monitoring activities. Similarly, teachers considering implementation of a self-management intervention will need to invest the time required to identify behavior needs, establish goals, determine reinforcers, and teach students how to recognize, record, and meet behavioral goals. In order for self-management to be an effective intervention, the procedures must be acceptable to all parties and implemented as planned (with integrity). If not fully supported, it is better to focus on a more suitable behavior management approach.
Self-management interventions are not appropriate for every child with ASD. Some procedures will meet the needs of individual students better than others. For example, severe behaviors may require a comprehensive approach using multiple intervention techniques. Students also react differently to self-management procedures. Some students will find being in control a motivating and reinforcing activity. For others, self-management procedures may actually be a time-consuming distraction. As with any behavioral intervention, a thorough understanding of the student’s problem and needs should precede and inform the selection of a specific behavior management strategy.
Concluding Comments
Supporting children with ASD in the general education classroom presents a unique challenge to the teachers and schools that serve them. However, many students will make progress and adapt to the classroom setting if provided with the appropriate interventions and behavioral supports. By learning self-management techniques