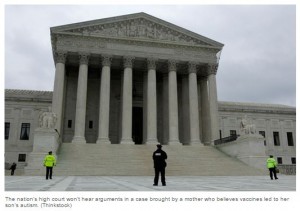 The U.S. Supreme Court has declined to hear a case brought by a woman who says her son’s autism was caused by vaccines he received.

Chandra D. Price sought compensation in 2008 from the National Vaccine Injury Compensation Program, later claiming that her son Christopher T. Wynn’s autism was caused by vaccines “being given in back-to-back increments, and by mercury toxicity.”

The U.S. Department of Health and Human Services moved to dismiss the claim arguing that Price had waited too long after her son was diagnosed in 1994 to seek compensation. Under the Vaccine Act, injury claims must be brought within 36 months of the onset of symptoms.

After years of back and forth, an attorney for Price filed a motion to dismiss her petition in 2012. Nonetheless, Price pressed forward independently and sought to reopen the case explaining that her attorney “misunderstood when Christopher’s last vaccine had been administered, which caused him to erroneously conclude that the claim had been filed outside of the Vaccine Act’s statute of limitations.”

However, a special master determined that Price did not provide sufficient reason for the case to be reopened and her request for a subsequent review of the matter was deemed to have been filed too late.