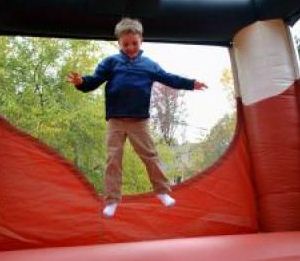 A new study by researchers at the Center for Injury Research and Policy of The Research Institute at Nationwide Children’s Hospital examined pediatric injuries associated with inflatable bouncers, such as bounce houses and moonwalks. Researchers found that from 1995 to 2010 there was a 15-fold increase in the number of inflatable bouncer-related injuries that were treated in U.S. emergency departments among children younger than 18 years of age. In 2010 alone, more than 30 children per day, or about one child every 45 minutes, were treated in hospital emergency departments for injuries associated with inflatable bouncers.
The study, available online November 26, 2012 and published in the December 2012 print issue of Pediatrics, found that while fractures (28 percent) and strains or sprains (27 percent) were the most common types of injuries, approximately 1 in 5 injuries (19 percent) were to the head and neck, demonstrating that use of these products can pose serious risks. Falls (43 percent) were the most common cause of injury followed by stunts and collisions. The majority of the injuries occurred either in a recreational setting (44 percent) or at home (38 percent).
Read the Rest of this Article on Science Daily