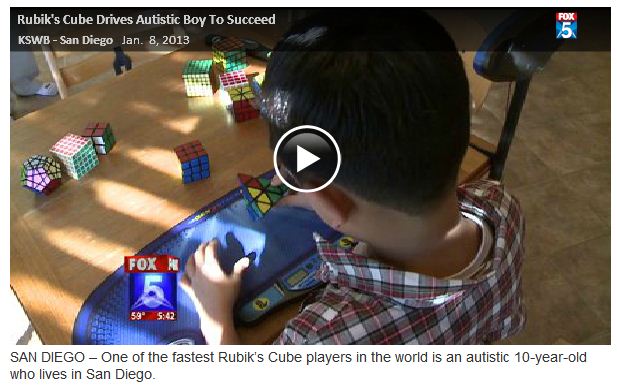 by Christian De La Rosa
One of the fastest Rubik’s Cube players in the world is an 10-year-old boy with autism who lives in San Diego.
Max Park started playing with Rubik’s Cube several years ago as part of his autism therapy.
“Initially, the reason to do it was to work with his motor skills,” said Max’s dad, Schwan Park.
He became enthralled by the puzzle, and  he asked his parents to take him to Los Angeles to watch some of the best compete.
“We thought let’s bring him there. Its good experience,” Park said.
Max ended up on the competition floor, solving a 6-by-6 Rubik’s Cube in less than three minutes.  His time won him a division title and placed him among the best 100 players in the world.
Read the Rest of this Article and Watch a Video of Max at Work!