[Source: Mama OT]
by Christie Kiley
Hot off the press! The same company who created the go-to fine motor app, Dexteria, is releasing a new app today that is designed for younger kids and tinier hands: Dexteria Jr.’ 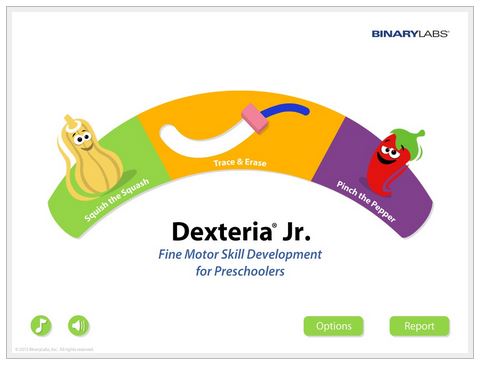 Dexteria Jr. was created after parents, therapists, and educators provided feedback saying they loved Dexteria but felt it was too advanced for younger kids. Score! We all know it’s important for kids to develop strong fine motor skills in the preschool years, but did you know research shows early childhood fine motor skills are a strong predictor of later success in math, reading, and science?
I was given a chance to try out this new app for free last week in order to share my feedback on opening day. It requires an iPad 2 or higher in order to utilize the video/camera feature. So far I’ve tried this app on myself, my 19-month toddler, a Kindergartner with developmental/fine motor delays, and a second grader with visual perceptual and visual-motor integration difficulties.
Dexteria Jr. consists of three games that target fine motor and visual motor skills at the preschool level. They’re also super cute and kid-friendly. Here’s what I think:
1. Squish the Squash. 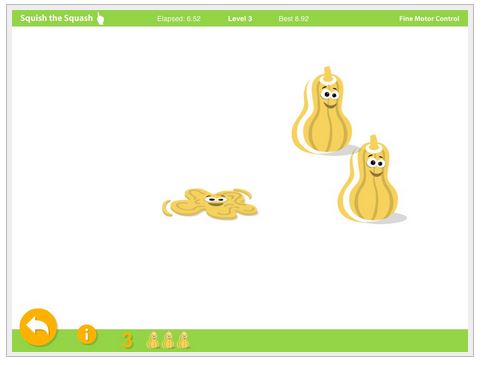 Kiddos must isolate their index finger and touch the screen to squish the squash. Lower levels contain stationary veggies while more advanced levels contain squash that move around and must be double-tapped in order to be squashed. Good activity for beginners, pretty straight forward. Make sure kids use their index finger to tap while curling their remaining fingers into a fist.
2. Trace and Erase.

Trace and Erase is a basic introduction to following paths and mazes. Users encounter increasingly more complex paths that include angles, curves, and corners as they advance through the levels.
Children must use their index finger to trace the line and then “erase” it with a digital eraser. With each line they erase, that part of the screen “disappears” and is replaced with part of your image from in front of the camera. Once all lines have been erased, the camera screen opens up and gives you a five-second countdown before taking a silly photo using a variety of crazy effects. You can also select the front camera if you want. The camera feature was really motivating for my Kindergarten kiddo and, without even being prompted, he began waving his arms and making silly faces in front of the camera as it counted down. Dexteria definitely figured out how to make mazes a little more fun and kid-friendly!

As far as I could tell, these photos were not saved anywhere in the app or on the iPad, so there shouldn’t be any issues related to confidentiality if you are using this with a HIPAA-protected client.
3. Pinch the Pepper. 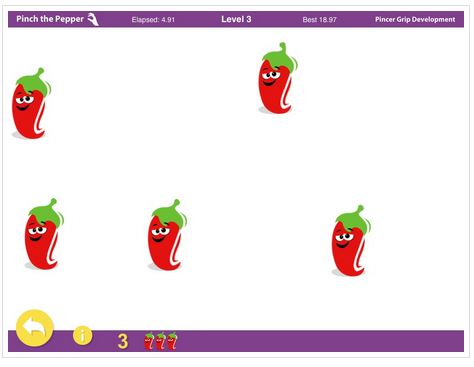 Much like the original Dexteria “Pinch It” game, kids must isolate thumb and index finger in order to pinch the pepper and make it disappear. Lower levels contain fewer peppers who simply sit in one spot, while higher levels contain peppers that move around at faster speeds. Advanced pepper pinchers will encounter peppers that change colors (from red to yellow) and will multiply if kids pinch them when they are in their alternate color. Great for working on strengthening those “pincher fingers” through repeition while also practicing skills related to visual attention, discrimination, tracking, timing, impulse control, and overall attention to task. 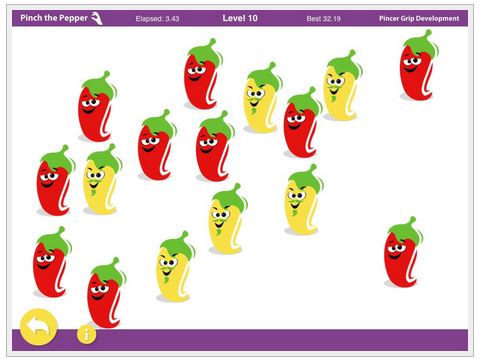 To be honest, I like this Pinch the Pepper game way more than the original Dexteria Pinch It game. The original has crabs that make a crunching noise when pinched. They have creepy legs that wiggle around and, since I’m not really a spider person, they sort of freak me out (no, seriously). But Pinch the Pepper? Same skill, way cuter, way less creepy. The dancing peppers are also accompanied by really cute music that I have yet to become sick of in the past week. I actually found myself bobbing my head back and forth and tapping my toes as kiddos played this game.
For all three of these games, it’s good to tilt the iPad up to a nearly vertical angle so kids can sit up straighter (vs. slouching down to the table), keep their head upright (vs. craning their neck down to see the screen), extend their wrists in order to tap or pinch the screen (vs. flexing their wrist when flat on the table), and strengthen their shoulder muscles (vs. resting arms on the table and iPad).
Encourage kids to utilize one hand to complete levels rather than switching back and forth between left and right. If they’re having trouble isolating those “pincher fingers” as I call them with kids (thumb and index finger), try giving them a clean sock that has two holes cut in it — one for each pincher finger. This will naturally encourage them to tuck their remaining fingers under. (I know I’ve seen this brilliant idea on Pinterest but can’t locate the link at the moment.)
As with any app, it is not wise to solely rely on technology in order to develop fine motor skills. Use this app as a “warm up” at the beginning of a session, a reinforcer for work completed, or a way to simply engage kids’ attention toward fine motor play as part of a greater approach to fine motor activities with physical manipulatives.
Dexteria Jr. can be purchased in the app store starting TODAY for $2.99 by clicking here. I hope you get a chance to try this app with the little ones in your life. It’s engaging, colorful, musical, and a fun way to introduce young kids to basic fine motor skills that will serve as a nice foundation for later grasping and handwriting skills.
*Though I was provided a free promotional code to try out this app for review, all opinions and feedback are my own.

Featured Contributor:  Christie Kiley, MA, OTR/L, MamaOT.com
Christie Kiley is a pediatric occupational therapist who is committed to helping children succeed. In addition to being an OT, she has a background in gymnastics, psychology, and education, and she is passionate about using gymnastics as a tool for pediatric therapy. Christie is a proud mom and enthusiastic advocate for the OT profession. She is the author of the blog Mama OT: Tips and tricks for those who care for children, and can be followed at MamaOT.com.