Area of the Brain That Processes Empathy Identified 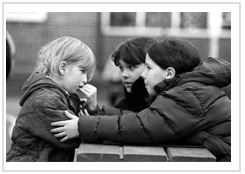 [Source: Science Daily]
An international team led by researchers at Mount Sinai School of Medicine in New York has for the first time shown that one area of the brain, called the anterior insular cortex, is the activity center of human empathy, whereas other areas of the brain are not. The study is published in the September 2012 issue of the journal Brain.
Empathy, the ability to perceive and share another person’s emotional state, has been described by philosophers and psychologists for centuries. In the past decade, however, scientists have used powerful functional MRI imaging to identify several regions in the brain that are associated with empathy for pain. This most recent study, however, firmly establishes that the anterior insular cortex is where the feeling of empathy originates.
Read the Rest of this Article on Science Daily