Arguments in the Home Linked With Babies' Brain Functioning 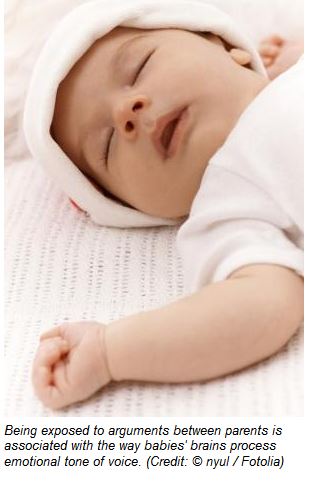 [Source: Science Daily]
Being exposed to arguments between parents is associated with the way babies’ brains process emotional tone of voice, according to a new study to be published in Psychological Science, a journal of the Association for Psychological Science.
The study, conducted by graduate student Alice Graham with her advisors Phil Fisher and Jennifer Pfeifer of the University of Oregon, found that infants respond to angry tone of voice, even when they’re asleep.
Babies’ brains are highly plastic, allowing them to develop in response to the environments and encounters they experience. But this plasticity comes with a certain degree of vulnerability — research has shown that severe stress, such as maltreatment or institutionalization, can have a significant, negative impact on child development.
Graham and colleagues wondered what the impact of more moderate stressors might be.
“We were interested in whether a common source of early stress in children’s lives — conflict between parents — is associated with how infants’ brains function,” says Graham.
Read the Rest of this Article on Science Daily