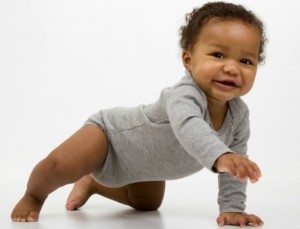 The season of a baby’s birth influences its motor development during its first year of life, a new study by University of Haifa researcher’s shows. Babies born in the winter (between December and May) start crawling earlier compared to babies born in the summer (June-November).

The research was conducted by Dr. Osnat Atun-Einy of the University’s Department of Physical Therapy and Dr. Dina Cohen, Moran Samuel and Prof. Anat Scher of the Department of Counseling and Human Development. 47 healthy babies with typical development patterns where divided them into two groups. The first group comprised “summer-fall” babies, 16 babies born from June to November, and the second, “winter-spring” babies, 31 babies born from December to May. The study consisted of motor observations in the babies’ homes when there were seven months old, and a follow-up session when they began to crawl. Parents were asked to record the stages in their babies’ development before and between the observations.
The study used the Alberta Infant Motor Scale (AIMS), an observational assessment with high reliability, to track the babies’ development. The scale relates to four positions: Prone (on the stomach), supine (on the back), sitting, and standing. The average age at which the babies started crawling was 31 weeks. But while the babies born in the winter (who started to crawl in the summer) started to crawl at an average 30 weeks, those born in the summer (who started to crawl in the winter) began crawling at an average of 35 weeks, with no differences noted between the boys or the girls or in the initial style of crawling (belly crawling or using hands and knees).
Read the Rest of this Article on Science Daily