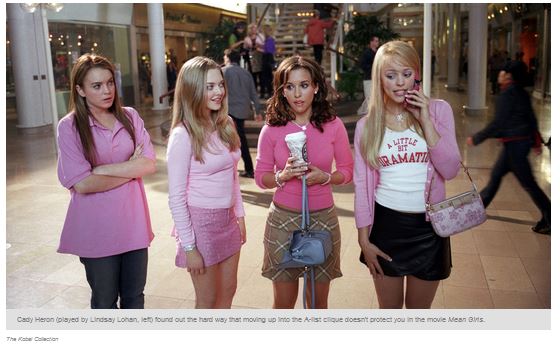 Movies like Mean Girls have told us that the popular crowd rules, and the nerds and nonconformists get picked on.
But even the top rungs of high school social ladder aren’t immune to bullying, researchers say. Becoming more popular can actually increase a teen’s risk of getting bullied rather than making them immune to attack.
To find that out, researchers from The University of California, Davis and Pennsylvania State University asked 4,200 high school students in North Carolina about their close friends and acquaintances. “We created sort of a social map of the school,” says Bob Faris, an associate professor of sociology at UC Davis.
“The climb up can be painful,” Faris says. Students trying to rise up the ranks were also more likely to bully others. “As kids get closer [to the top],” Faris says, “they become more involved in social combat.”
The researchers tracked changes in social hierarchies over a year, asking students to name peers who had been mean to them as well as students they had picked on.
They found that as kids became more popular, their chances of getting bullied increased. For example, if a student midway up the social ladder moved into the upper rungs, his or her chance of being bullied went up by 25 percent.
Read the Rest of this Article on NPR