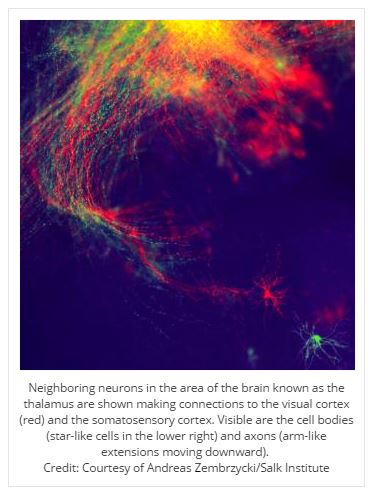 Scientists at the Salk Institute have discovered that the role of neurons — which are responsible for specific tasks in the brain — is much more flexible than previously believed.
By studying sensory neurons in mice, the Salk team found that the malfunction of a single molecule can prompt the neuron to make an “early-career” switch, changing a neuron originally destined to process sound or touch, for example, to instead process vision.
The finding, reported in PNAS, will help neuroscientists better understand how brain architecture is molecularly encoded and how it can become miswired. It may also point to ways to prevent or treat human disorders (such as autism) that feature substantial brain structure abnormalities.
“We found an unexpected mechanism that provides surprising brain plasticity in maturing sensory neurons,” says the study’s first author, Andreas Zembrzycki, a senior research associate at the Salk Institute.
Read the Rest of this Article on Medical News Today