Children with Better Coordination More Likely to Achieve at School 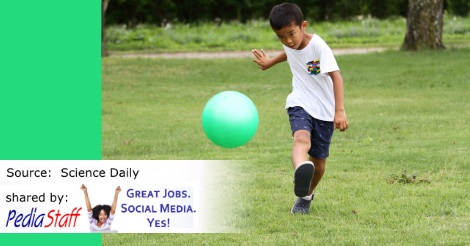 Young children with better eye-to-hand coordination were more likely to achieve higher scores for reading, writing and math according to new research — raising the possibility schools could provide extra support to children who are clumsy.

Just over 300 children aged four to 11 took part in computer tasks to measure their co-ordination and interceptive timing — their ability to interact with a moving object.

The study, led by researchers at the University of Leeds, is published in the peer-review journal Psychological Science.

In the ‘interceptive timing’ task, the children had to hit a moving object with an on-screen bat.

This task taps into a fundamental cognitive ability — how the brain predicts the movement of objects through time and space. The researchers suggest that this skill may have provided the evolutionary foundations for the emergence of cognitive abilities related to mathematics, a theory first proposed by the famous Swiss psychologist Jean Piaget in the 1950s.