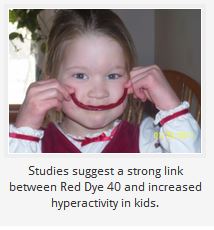 by Valerie Lego –
More than five million children in this country are diagnosed with ADHD, but how many of them truly have the disorder? Could some of those children be eating something that only makes them appear to have the condition?
Research has suggested a link between children who are hyper and appear to have ADHD, and Red Dye 40.
Color additives have been used to enhance  our food for nearly 150 years. The federal government began to oversee their use in the 1880s and in 1931 approved 15 dyes for food, medications, and cosmetics. Six of those colors are still being used today.
But do you know what the base ingredient is? Petroleum, which is why the safety of food dyes has been debated for nearly 80 years.
Lately the focus has been on Red Dye 40. Nearly a dozen studies since the 1980s show the dye may have an affect on children prone to hyperactivity.
Laura Kitchen doesn’t need any research. She has seen its affects in her six year old son Thomas. “He loves to play with LEGOs. He builds trucks together and builds trains. You can leave him alone in his room for a couple hours and he doesn’t come down for anything… very self sufficient,” says Kitchen.
Read the Rest of this Article on Special Ed Post