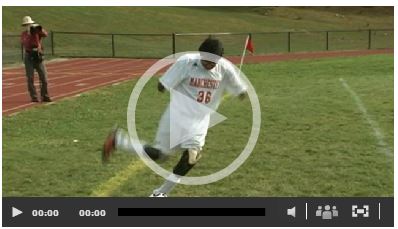 A high school sophomore in New Jersey who is a quadruple amputee is motivating people both on and off the soccer field with his indomitable spirit.

Jorge Dyksen, 16, was stricken with an infection as an infant that prevented blood from flowing through his fingers and toes and the only way to save his life was to amputate both hands and both feet, his family recalled.

Despite becoming a quadruple amputee at just 14 months old, Jorge said he doesn’t let anything hold him back. His message is simple: “Never give up.”

Tim Smithhart, Jorge’s principal at Manchester Regional High School, said: “Nothing stops him from anything he sets his mind to,” though “he might confess to not being able to tie his shoes.”

Jorge plays starting forward for the Manchester Falcons junior varsity team. With the help of Rotarian Tom Ford in Panama and Healing the Children in New Jersey, Jorge has been splitting his time between his birth country and the United States since he was a baby.

Read the Rest of this Story on ABC News