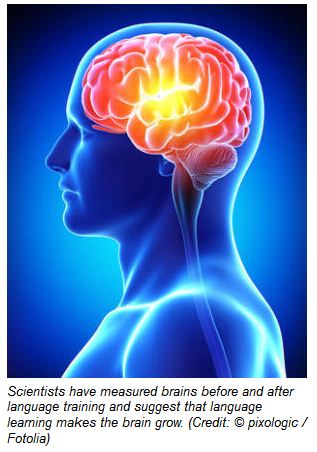 At the Swedish Armed Forces Interpreter Academy, young recruits learn a new language at a very fast pace. By measuring their brains before and after the language training, a group of researchers has had an almost unique opportunity to observe what happens to the brain when we learn a new language in a short period of time.
At the Swedish Armed Forces Interpreter Academy in the city of Uppsala, young people with a flair for languages go from having no knowledge of a language such as Arabic, Russian or Dari to speaking it fluently in the space of 13 months. From morning to evening, weekdays and weekends, the recruits study at a pace unlike on any other language course.
As a control group, the researchers used medicine and cognitive science students at Umeå University — students who also study hard, but not languages. Both groups were given MRI scans before and after a three-month period of intensive study. While the brain structure of the control group remained unchanged, specific parts of the brain of the language students grew. The parts that developed in size were the hippocampus, a deep-lying brain structure that is involved in learning new material and spatial navigation, and three areas in the cerebral cortex.
Read the Rest of this Article on Science Daily.com