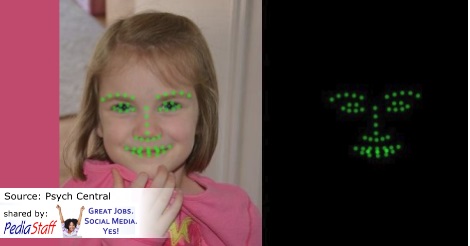 The study, described June 1 in an open access journal npj Digital Medicine, points the way to broader, easier access to screening for autism and other neurodevelopmental disorders.

The app first administers caregiver consent forms and survey questions and then uses the phone’s ‘selfie’ camera to collect videos of young children’s reactions while they watch movies designed to elicit autism risk behaviors, such as patterns of emotion and attention, on the device’s screen.

The videos of the child’s reactions are sent to the study’s servers, where automatic behavioral coding software tracks the movement of video landmarks on the child’s face and quantifies the child’s emotions and attention. For example, in response to a short movie of bubbles floating across the screen, the video coding algorithm looks for movements of the face that would indicate joy.

In this study, children whose parents rated their child as having a high number of autism symptoms showed less frequent expressions of joy in response to the bubbles.