Editor’s Note: Yet another clinically documented reason to get the kids outside more!!
[Source: Science Daily] 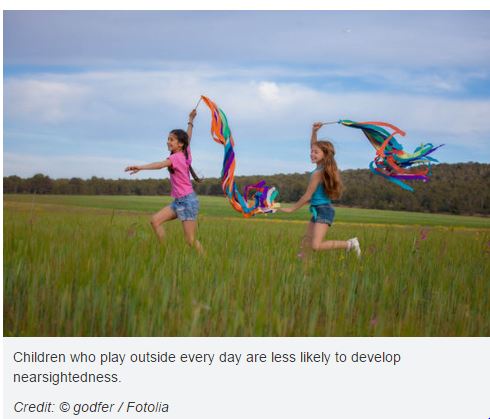 The addition of a daily outdoor activity class at school for three years for children in Guangzhou, China, resulted in a reduction in the rate of myopia (nearsightedness, the ability to see close objects more clearly than distant objects), according to a study in the September 15 issue of JAMA.

Myopia has reached epidemic levels in young adults in some urban areas of East and Southeast Asia. In these areas, 80 percent to 90 percent of high school graduates now have myopia. Myopia also appears to be increasing, more slowly, in populations of European and Middle Eastern origin. Currently, there is no effective intervention for preventing onset. Recent studies have suggested that time spent outdoors may prevent the development of myopia, according to background information in the article.
Mingguang He, M.D., Ph.D., of Sun Yat-sen University, Guangzhou, China, and colleagues conducted a study in which children in grade 1 from 12 primary schools in Guangzhou, China (six intervention schools [n = 952 students]; six control schools [n = 951 students], were assigned to 1 additional 40-minute class of outdoor activities, added to each school day, and parents were encouraged to engage their children in outdoor activities after school hours, especially during weekends and holidays (intervention schools); or children and parents continued their usual pattern of activity (control schools). The average age of the children was 6.6 years.
Read the Rest of this Article on Science Daily