[Source: Research in Developmental Disabilities, via Your Therapy Source ] 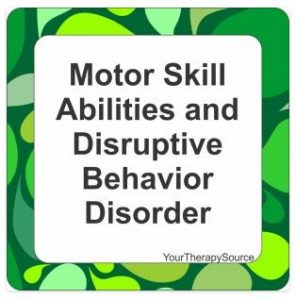 Research in Developmental Disabilities published research on the motor abilities of 99 adolescents with disruptive behavior disorder (DBD) and evaluated the role of comorbid ADHD.  Each participant was assessed with The Bruininks–Oseretsky test of motor proficiency, Second Edition.  In addition, further statistical analyses were completed to determine differences in motor profiles between individuals diagnosed with oppositional defiant disorder (ODD) or conduct disorder (CD) and comparing the motor profiles of individuals with or without comorbid ADHD.
The results indicated the following:
1.  adolescents with DBD showed a mixed motor impairment profile. Even after controlling for IQ, the DBD group obtained significantly lower scores in comparison to controls.
2.  the adolescents with ODD and CD showed a similar motor profile.
3.  adolescents with comorbid ADHD did not produce major differences in the motor profile.
The researchers concluded that since 79% of the adolescents with a DBD suffered from motor impairment, motor ability should be addressed in research as well as in clinical practice.
Reference:  Tine Van Damme, Bernard Sabbe, Dirk van West, Johan Simons. Motor abilities of adolescents with a disruptive behavior disorder: The role of comorbidity with ADHD. Research in Developmental Disabilities. Volume 40, May 2015, Pages 1–10. doi:10.1016/j.ridd.2015.01.004
Support our Contributors and Visit the Your Therapy Source Blog and Website