Thank You to Stacy Menz of Starfish Therapies for this great idea! 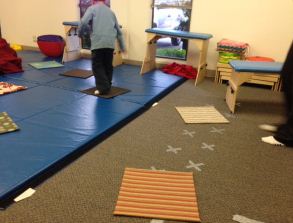 Okay, so the title may be confusing but this is what our therapist and her kiddo called it.  I loved the idea.  They took these awesome carpet squares that we had found at ScrapSF and spread them out across the carpet and mat.  They then had some clothes pins on one side of the room and a cut out shape in the middle of the crash pad.  The child had to start on the side with the clothespins and pick up one and then hop from carpet square to carpet square (without touching the mat or carpet) all the way to the crash pad where they got to crash and then put their clothespin on the cut out shape.  They then would make their way back across the carpet square path to get their next clothespin.
Now this was brilliant in several ways.

What ways could you modify this to work on the skills you wanted?