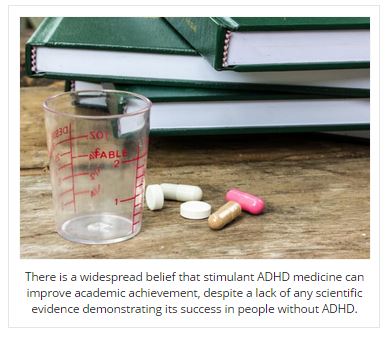 At college, students can come under a lot of pressure to achieve good results, but, unfortunately, a large number may be resorting to risky methods to deal with expectations. A recent literature review reports that 1 in 6 college students misuse stimulant medications prescribed for attention deficit hyperactivity disorder.

There is a widespread belief that stimulant ADHD medicine can improve academic achievement, despite a lack of any scientific evidence demonstrating its success in people without ADHD.

These common medications, including Ritalin and Adderall, are Schedule II controlled substances, placing them in the same legal bracket as substances such as cocaine and methamphetamine. According to the study, 17% of students are also risking legal trouble as well as health problems.

Study author Kari Benson from the University of South Carolina (USC) first became aware of this drug misuse when studying social impairment in children with attention deficit hyperactivity disorder (ADHD) as a sophomore.