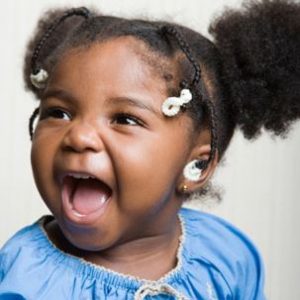 We all know that laughter is the best medicine, but a team of French scientists has discovered that using humor also appears to help toddlers learn new tasks, reports a new study in the journal Cognition and Emotion.

Building on the knowledge that making older children laugh can enhance many aspects of cognition, Rana Esseily and her colleagues designed an experiment to see whether using humor could also have an effect on the ability of infants to learn.
Each of the 18-month-olds selected to participate in the final part of the study observed an adult using a tool to grab an out-of-reach toy. In one group the adult simply played with the toy after retrieving it; but in the other group, the adult threw the toy immediately on the floor, which made half the children in that group laugh.
When Esseily and her colleagues studied their data, they found that the children who laughed at the antics of the adults were able to repeat the action themselves more successfully than those who didn’t laugh, as well as those who were included in the ‘humorless’ control group.
Read the Rest of this Article on Science Daily