Worth Repeating: The Selling of Attention Deficit Disorder

Severely hyperactive and impulsive children, once shunned as bad seeds, are now recognized as having a real neurological problem. Doctors and parents have largely accepted drugs like Adderall and Concerta to temper the traits of classic A.D.H.D., helping youngsters succeed in school and beyond. 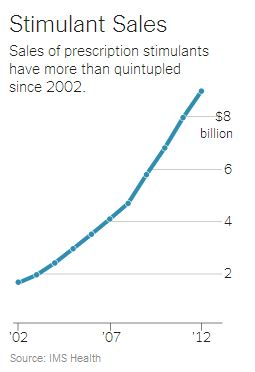 But Dr. Conners did not feel triumphant this fall as he addressed a group of fellow A.D.H.D. specialists in Washington. He noted that recent data from the Centers for Disease Control and Prevention show that the diagnosis had been made in 15 percent of high school-age children, and that the number of children on medication for the disorder had soared to 3.5 million from 600,000 in 1990. He questioned the rising rates of diagnosis and called them “a national disaster of dangerous proportions.”

“The numbers make it look like an epidemic. Well, it’s not. It’s preposterous,” Dr. Conners, a psychologist and professor emeritus at Duke University, said in a subsequent interview. “This is a concoction to justify the giving out of medication at unprecedented and unjustifiable levels.”

The rise of A.D.H.D. diagnoses and prescriptions for stimulants over the years coincided with a remarkably successful two-decade campaign by pharmaceutical companies to publicize the syndrome and promote the pills to doctors, educators and parents. With the children’s market booming, the industry is now employing similar marketing techniques as it focuses on adult A.D.H.D., which could become even more profitable.

Read the Rest of this Article on the New York Times.com