Young Children use Physics, not Previous Rewards, to Learn About Tools 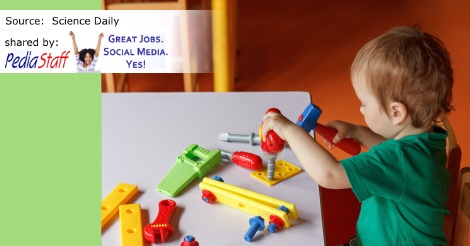 Children as young as seven apply basic laws of physics to problem-solving, rather than learning from what has previously been rewarded, suggests new research from the University of Cambridge.

The findings of the study, based on the Aesop’s fable The Crow and the Pitcher, help solve a debate about whether children learning to use tools are genuinely learning about physical causation or are just driven by what action previously led to a treat.

Learning about causality — about the physical rules that govern the world around us — is a crucial part of our cognitive development. From our observations and the outcome of our own actions, we build an idea — a model — of which tools are functional for particular jobs, and which are not.

Dr Lucy Cheke from the Department of Psychology at the University of Cambridge says: “Imagine a situation where someone is learning about hammers. There are two hammers that they are trying out — a metal one and an inflatable one. Normally, the metal hammer would successfully drive a nail into a plank of wood, while the inflatable hammer would bounce off harmlessly.