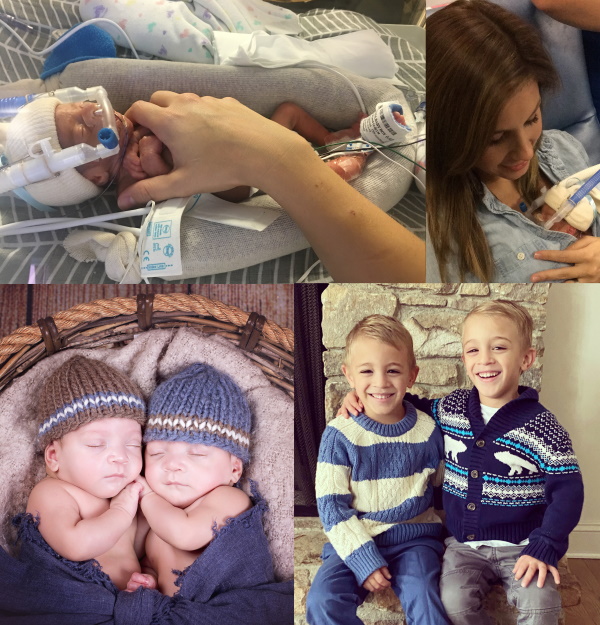 Editor’s Note:   November is Prematurity Awareness Month.    Last year we shared a very special story about Preemies with our readers that is definitely worth republishing!  – Enjoy

Lauren Fontana is a Sr. Staffing Consultant with PediaStaff and a vital and longtime member of our PediaStaff family.    We reached out to her this week to see if she might share with our readers the very personal and poignant story of her twin boys (born at 25 weeks gestation) for World Prematurity Awareness Month.     Lauren wrote this story just a couple of months after Liam and Luca were discharged from the NICU at St. Luke’s University Hospital in Bethlehem, PA

Thank You, Lauren for sharing your intimate journey with us.  We are immensely grateful for all of you!

photos © and courtesy of The Fontana Family

The week my sons were born was the worst week of my life, and the day they were born was the single worst day of my life. Please don’t get me wrong – these boys were wanted, prayed for and cried over as we struggled to conceive them. When my husband and I found out there were two, we vacillated between accusing the nurse of lying and telling her she was wrong. “There was only one egg. This is impossible.” She told us they were identical twins, and that moment is one neither of us ever will  forget. We had ultrasounds every two weeks, and my Perinatologist and Ob-Gyn answered my  1,293 questions regarding the delivery of twins and the likelihood of a vaginal birth, which I desired. On September 14, 2016, when I was 25 weeks pregnant, I was feeling off and made an appointment for that afternoon with my OB. I apologized to her as I laid down for my transvaginal ultrasound, telling her I felt like a first-time mom overreacting. We immediately could see that I was dilated, and she told me to go right to Labor and Delivery. I asked if I could first go home and pack my hospital bag, and she said I needed to go right to the hospital. I burst into tears, as I realized the gravity of the situation. They checked me at the hospital, and I was 3 centimeters dilated, 80 percent effaced and having regular contractions. They explained I would need a C-section if I delivered, and I nodded, understanding that all my preparation didn’t matter at this point.

The night I was admitted, they started me right away on medication to stall labor, as well as medication for the babies’ lungs and brain development. Members of the NICU team met us in my Labor and Delivery room and went over the risks of giving birth to 25 weekers. While I’m sure more was said, all I heard was that it was a real possibility they could die either during birth or shortly thereafter, and that even if they lived, severe disabilities (such as cerebral palsy) were much more likely. The next four days were spent with my body fighting preterm delivery. I couldn’t cry, or my contractions would pick up. My heart broke to be away from my 2-year-old, Ariana, although I knew my family was taking amazing care of her. My husband didn’t leave my side, and if I thought our infertility brought us close together, it pales in comparison to what the next three months would bring. On the evening of the 18th, four days after I was admitted, I told my husband I thought the twins were coming that night. The monitor wasn’t picking up very many contractions, but I kept telling him and my nurse that they were there and painful. When my nurse finally adjusted my monitor, it became clear that these boys were coming soon. One of the doctors in my practice checked me, and I was seven centimeters dilated. They immediately prepped me for a C-section.

I remember feeling relief. If I had any control in the situation before, I knew that was gone now, and it was up to God and the doctors. My memory of that night hasn’t been pieced together, and probably forever will remain disjointed. When I think back, I see my Ob-Gyn telling me everything will be okay and hugging me as I got my spinal. I hear myself ask several times where my husband is. I picture myself laying there and waiting several minutes after they said, “Boys are out,” to ask quietly, “Are they alive?” I feel crushed when I ask a nurse to guess how much they weigh, and she answers, “About a pound.” Minutes pass. A nurse comes out and tells us their weights and Apgar scores. Luca David was one pound 14 ounces. Apgar 5 and 8. Liam Michael was two pounds one ounce. Apgar was 8 and 8. Chris and I look at each other, and we were thinking the same thing. “They might make it.” They were born at 10:39 p.m. and 10:41 p.m., respectively. It took much longer for us to see the boys than the nurses expected, and I kept asking the night nurse if they had died. Around 3 a.m., Chris, my parents and I finally were able to go to the NICU to meet the babies. They wheeled me over on the stretcher. My memory of seeing them that night comes mostly from the pictures taken.

Pictures don’t do justice to how tiny and fragile they were. They were very pink at first, and their skin looked like it might fall off to the touch. Within days, the skin turned and looked bruised and thin. They lost 20 percent of their birth weight, more than is expected. We were told the first 24 hours were critical. After that, we needed them to make it 48 hours, 72 hours and then one week. After one week, they said, we would have a better gauge of prognosis. News of their birth was met with more “I heard the bad news,” “I’m so sorry,” and “Congratulations, I think?” than I care to remember. My heart broke with each picture I texted or posted on social media and each comment about their breathing apparatus, blankets, size, anything but how cute they were. Preemies look different, and I knew it scared people. Being discharged without babies in car seats made my heart ache, and I cried off and on that whole day. I went straight up to their sweet, empty nursery and bawled, wondering if only one baby would end up in it – or worse, no babies. Being home with our first baby was an amazing distraction, but I can’t imagine how it would feel to not have her there with us. When the boys were a week old, we got to hold them for the first time. They felt like everything and nothing all at once – so heavy with emotion but with almost weightless bodies that were hardly noticeable on my chest if not for the hard, plastic CPAP mask poking me.

Being a NICU parent is indescribable and changes you in ways I never could adequately put into words. We watched our babies fight for their lives with every breath they took. We received calls in the middle of the night saying they stopped breathing and turned blue. We later witnessed it in person on multiple occasions. We listened as a doctor told us that Liam might need heart surgery. We took the ambulance to Philadelphia when Luca was transferred to another hospital for possible eye surgery (that he thankfully didn’t need). Thanksgiving was spent in three different cities, just so we could see each of our three children. We watched a mom mourn the loss of her precious baby, a twin, born a week older than the boys. Our lives revolved around numbers, which helped my husband (an engineer) process everything, but made me feel disconnected. I struggled with the desire to talk to people who weren’t here, witnessing what we did on a daily basis. To that end, we felt an instant love for those who were in the hospital with us: the doctors, nurses, fellow NICU parents, etc., and we developed a new appreciation and love for those friends and family who spent time with us in the NICU. The doctors and nurses also spent so much time visiting us: telling us stories, making us laugh and giving us hugs when we needed it. When I say we couldn’t have done this without them, I’m not just referring to the obviously extraordinary medical care they provided our children. We will remember them always.

I type this at 11:26 p.m. with Luca in one arm, my other hand typing as tears fall down my cheeks. I’m so grateful he and his brother are with us. We are tired – it’s been five months since we slept well. The seven weeks they have been home have been the sweetest challenge, filled with sleepless nights, tons of specialist appointments and more love from big sister Ariana than I ever imagined. She has stopped asking me every night and every time we leave the house if we’re going to the hospital, and that helps me know we all are healing. We have been running a marathon, but God met us here and had the perfect people in our lives to run with us. We know we will make it.