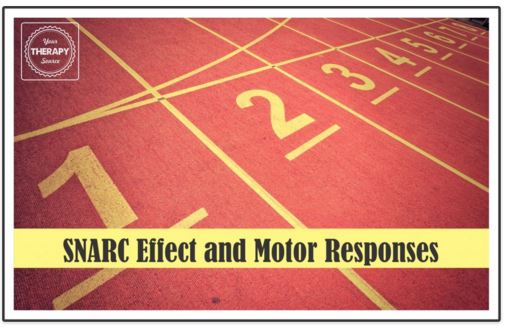 Have you ever heard of the SNARC effect?  I had not, so when I read about it in a research article I decided to find out more information.  SNARC stands for spatial-numerical association of response codes.   The SNARC effect is when someone is presented with smaller numbers people respond faster with the left hand and when presented with larger numbers people respond faster with the right.  This results in an mental representation of a number line.  Some research indicates that the SNARC effect is present in children as young as 5.8 years old. Preschool children are developing the SNARC effect.
In one study, 4 year olds participated in a spatial search task with a box that had seven compartments labeled with the numerals 1 to 7. For half of the children the numbers increased from left to right, and for the other half the numbers increased from right to left. The results showed that children were faster and more accurate in the left-to-right search condition. In a second experiment, the researchers asked preschool children (3–5 years of age) to count a given linear set of objects. The results indicated that already 73% of the preschoolers started counting at the leftmost object and proceeded to the rightmost object.
Read the Rest of this Article on Your Therapy Source