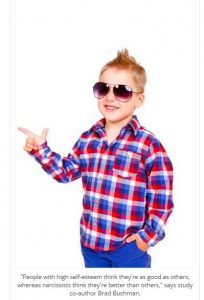 If you want to avoid having narcissistic children, do not “overvalue” them. That is the take-home message of a new study from researchers at The Ohio State University in Columbus and the University of Amsterdam in the Netherlands, published in theProceedings of the National Academy of Sciences.

“People with high self-esteem think they’re as good as others, whereas narcissists think they’re better than others,” says study co-author Brad Bushman.

The researchers undertook the study in an effort to understand the origins of narcissism. They claim that theirs is the first prospective study to investigate how narcissism develops over time.

The team recruited 565 children in the Netherlands and their parents. The children were aged between 7 and 11 when the study began. Participants completed standardized psychological research surveys four times over the course of the study, with a 6-month interval between each survey.