Difficult Behavior in Young Children May Point to Later Problems 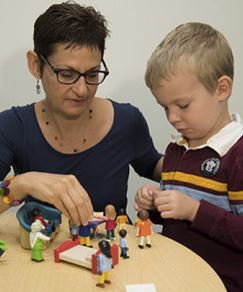 It’s normal for a young child to have tantrums and be otherwise disruptive, but researchers have found that if such behavior is prolonged or especially intense, the child may have conduct disorder, a childhood psychiatric problem that could be a harbinger of antisocial behavior.

Researchers at Washington University School of Medicine in St. Louis found that certain symptoms of conduct disorder indicate problems are likely to continue as kids reach school age. They recommend that children who exhibit these symptoms — among them, high-intensity defiant behavior, aggression and destruction of property — be referred to mental health professionals for evaluation and possible intervention.
Their findings are published Jan. 15 in The Journal of Pediatrics.
“Previously, we did not understand the empirical differences between normal disruptive behaviors in preschoolers — like temper tantrums, for example — and behaviors that signal problems,” said senior investigator Joan L. Luby, MD, professor of child psychiatry. “If you went to your pediatrician and said, ‘My 3-year-old is having tantrums,’ the pediatrician wouldn’t tell you to see a psychiatrist.”
Read the Rest the Rest of this Article on Science Daily