Body Suit for Cerebral Palsy in the News 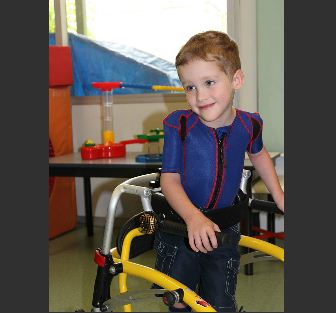 [Source:  ABC.net.au]
Four year-old Sidney Cook of Canungra has a form of cerebral palsy that mainly affects his legs and ability to walk.
But a new body suit is going to help increase his core strength to give him the support to walk and reduce his support needs.
It’s called a ‘Dynamic Movement Orthotic’ body suit, or ‘DMO’.
Sidney’s mum, Narelle, was able to purchase the DMO suit after receiving funding from the federal government’s ‘Better Start’ program, giving her access to a $12 000 grant, of which $2 100 can be used towards equipment.
Yesterday Sidney visited the Cerebral Palsy League (CPL) Gold Coast office where therapists helped him into his new custom-fitted suit for the first time.
The suit works by putting increased pressure on certain muscle groups, leading to better awareness of certain parts of the body. This ultimately improves the control of movement.
Read the Rest of This Article on ABC.net.au