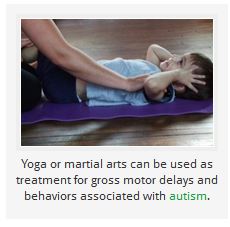 The CDC estimated a 1% worldwide prevalence for autism spectrum disorders (ASD). In the United States, 1 out of 88 kids is diagnosed with ASD (according to data from a survey conducted in 2008). Autism spectrum disorders are characterized by diminished social interaction skills, stereotypic engagement in repetitive tasks, lengthy visual engagement with a target, refusal to deviate from set rituals and diminished spontaneity in expressing emotions. In addition to behavioral difficulties, reduced motor abilities are also reported.
In a recent review, Bhat, Landa and Galloway examined evidence to show that children who are at risk for ASD had deficient motor capabilities. Movements like non-uniform gait, variable stride length when walking, and underperformance in aiming tasks are evident in children who are diagnosed with ASD. Cognitive impairment is also evident in these kids. There is evidence to show that children who do not suffer from a cognitive lag but yet underperform on tasks that require physical balance and coordination of limbs may be later diagnosed as suffering from ASD.
Read the Rest of this Article on Brain Blogger
Support the Sites that Support PediaStaff – visit Special Ed Post