Second Impact Syndrome: A Devastating Injury To The Young Brain 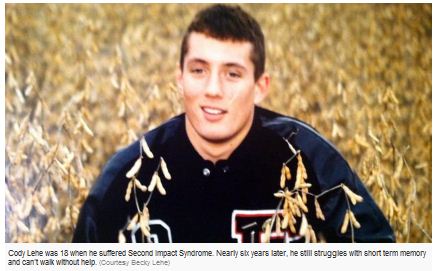 Physicians at Indiana University School of Medicine and the Northwest Radiology Network (Indianapolis, Indiana) report the case of a 17-year-old high school football player with second impact syndrome (SIS). A rare and devastating traumatic brain injury, SIS occurs when a person, most often a teenager, sustains a second head injury before recovery from an earlier head injury is complete. To the best of the authors’ knowledge, this is the first reported case in which imaging studies were performed after both injuries, adding new knowledge of the event. Findings in this case are reported and discussed in “Second impact syndrome in football: new imaging and insights into a rare and devastating condition. Case report,” by Elizabeth Weinstein, M.D., and colleagues, published recently online, ahead of print, in the Journal of Neurosurgery: Pediatrics.
The patient sustained the first injury when he received a helmet-to-helmet hit from an opposing player during a punt return. Despite immediate symptoms of dizziness and visual disturbance, he continued to play in the game. For the next few days he experienced severe headaches and fatigue. Four days after the game, he consulted a doctor about the headaches. Computerized tomography (CT) scans of the patient’s head appeared normal, but he was advised not to return to play until all of his symptoms were gone. The young man chose instead to return to practice immediately.
Read the Rest of this Article on Medical News Today
Read the Story of Cody Lehe (the boy followed in the case above) on ABC News