Editor’s Note:  This article by USA Today refreshes regularly.   The text below may be inaccurate as things develop, but the link at the bottom will point to the most updated information on national school system closures by state and metro area. 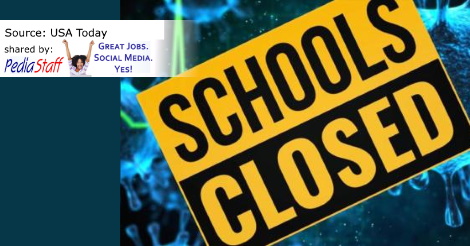 [Source:  USA Today]  Twenty-two states and a number of large urban school districts — including the nation’s largest in New York City and its second-largest in Los Angeles — are shutting down all K-12 schools as part of a sweeping attempt to contain the spread of the coronavirus.

Other major metropolitan districts such as Atlanta, Denver, San Francisco, San Diego, Washington, D.C. and Austin, Texas, have also shuttered. And a growing number of smaller districts around the country have also chosen to close.

The actions are the first wave of widespread school closings in the U.S., and they stand to upend school and family routines for millions of children. According to a count updated mid-afternoon Friday by Education Week magazine, about a quarter of American schoolchildren had been or were scheduled to be affected by a school closure — and that was before some states announced their actions.

Read the Rest of this Article on USA Today