What Causes Down Syndrome?

All material Copyright © 2009 National Down Syndrome Society
Reprinted with the express permission of the National Down Syndrome Society as originally published on their website.
By: The National Down Syndrome Society
What Causes Down Syndrome
The human body is made of cells. All cells contain a center, called a nucleus, in which genes are stored. Genes, which carry the codes responsible for all our inherited characteristics, are grouped along rod-like structures called chromosomes. Normally, the nucleus of each cell contains 23 pairs of chromosomes, half of which are inherited from each parent. Down syndrome occurs when some or all of a person’s cells have an extra full or partial copy of chromosome 21.
The most common form of Down syndrome is known as Trisomy 21. Individuals with Trisomy 21 have 47 chromosomes instead of the usual 46 in each of their cells. The condition results from an error in cell division called nondisjunction. Prior to or at conception, a pair of 21st chromosomes in either the sperm or the egg fails to separate. As the embryo develops, the extra chromosome is replicated in every cell of the body. This error in cell division is responsible for 95 percent of all cases of Down syndrome.
Down syndrome also encompasses two other genetic conditions: mosaicism and translocation. Mosaicism occurs when nondisjunction of chromosome 21 takes place in one of the initial cell divisions after fertilization causing a person to have 46 chromosomes in some of their cells and 47 in others. The least common form of Down syndrome, mosaicism, accounts for only 1 to 2 percent of all cases. Translocation, which accounts for 3 to 4 percent of cases of Down syndrome, occurs when part of chromosome 21 breaks off during cell division and attaches to another chromosome, usually chromosome 14. While the total number of chromosomes in the cells remains 46, the presence of an extra part of chromosome 21 causes the characteristics of Down syndrome.
The cause of the extra full or partial chromosome is still unknown. What we do know that it is not caused by environmental factors or anything the mother does before or during her pregnancy. Maternal age is the only factor that has been linked to an increased chance of having a baby with Down syndrome resulting from nondisjunction. A 35-year-old woman has a one in 353 chance of conceiving a child with Down syndrome. By age 40, the incidence has increased to one in 85. However, because younger women have higher fertility rates, more babies with Down syndrome are born to women under the age of 35. Once a woman has given birth to a baby with Down syndrome, the chance of having a second child with Down syndrome might be increased by an additional 1 percent.
Maternal age, however, is not linked to the chance of having a baby with translocation. Most cases are sporadic, chance events, but in about one third of translocation cases, one parent is a carrier of a translocated chromosome. For this reason, the chance of translocation in a second pregnancy is higher than that seen in nondisjunction. 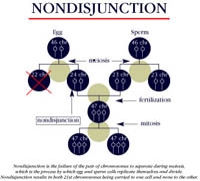 What is Mosaicism?
Every cell in the human body is ultimately derived from one initial cell: the fertilized egg, which is also called the zygote. After fertilization, the zygote then proceeds to divide. As new cells form, the chromosomes duplicate themselves so that the resulting cells have the same number of chromosomes as the original cell. However, errors sometimes happen, and one cell ends up with a different number of chromosomes. From then on, all cells originating from that cell will have the different chromosomal number, unless another error takes place. (All like cells originating from a single type of cell is called a cell line—for example, the skin cell line, the blood cell line, the brain cell line, etc.) When a person has more than one type of chromosomal makeup, this is called mosaicism, like the mosaic style of art in which a picture is made up of different colors of tiles. In Down syndrome, mosaicism means that some cells of the body have trisomy 21, and some have the typical number of chromosomes.
How is Mosaicism Diagnosed?
The usual way in which mosaic Down syndrome is discovered is through genetic testing of the baby’s blood. Typically, 20 to 25 cells are examined. If some of the cells have trisomy 21 and some don’t, then the diagnosis of mosaicism is made. However, this blood test can only determine the level of mosaicism in the blood cell line. While mosaicism can occur in just one cell line (some blood cells have trisomy 21 and the rest don’t), it can also occur across cell lines (skin cells may have trisomy 21 while other cell lines don’t). In the latter case, it may be more difficult to diagnose mosaicism. When mosaicism is suspected but not confirmed through the blood test, other cell types may be tested: skin and bone marrow are most commonly the next cells checked. Because skin cells and brain cells arise from the same type of cell at the beginning of fetal development (ectoderm), many doctors believe that skin cell tests reflect the chromosomal makeup of the brain cells as well.
How Does Mosaicism Happen in Down Syndrome?
There are two different ways mosaicism can occur: