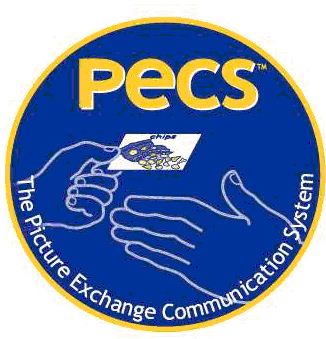 Editor’s Note:  This article was written for parents.  It is an excellent introduction to PECS that you might give to the parents and guardians of the kiddos you treat.
What is it?
A picture exchange communication system (PECS) is a form of augmentative and alternative communication (AAC) that uses pictures instead of words to help children communicate. PECS was designed especially for children with autism who have delays in speech development.
When first learning to use PECS, the child is given a set of pictures of favorite foods or toys. When the child wants one of these items, he gives the picture to a communication partner (a parent, therapist, caregiver, or even another child). The communication partner then hands the child the food or toy. This exchange reinforces communication 1-4.
PECS can also be used to make comments about things seen or heard in the environment. For example, a child might see an airplane overhead, and hand a picture of an airplane to his or her parent. As the child begins to understand the usefulness of communication, the hope is that he will then begin to use natural speech 1.
What’s it like?
A child can be trained in PECS by a parent, caregiver, or therapist who has learned about the method (see Resources). An applied behavior analysis (ABA) approach is used, in which prompts are given to guide the picture exchange. Further, in the early phases of PECS training, the child chooses a picture of a desired food, and receives the food in exchange for the picture. Getting the food is the positive reinforcement for using the picture to communicate.
PECS is usually taught in six phases 1,2:

What is the theory behind it?
The direct reinforcement that comes from immediately getting what you want is the key to PECS. Without having to use spoken words, a child is able to turn an inner desire into an external reward. It is thought that tangible rewards are more reinforcing to children with autism than social rewards, at least during the first steps of communication learning. However, if these rewards are too difficult to receive – that is, if it is very difficult for the child to form words – then the point of communication may, at first, be lost on these children. This can result in tantrums and other undesirable behavior, because the child cannot clearly communicate what s/he wants. However, when children with autism are trained in PECS, problem behaviors often subside as the benefits of communication become more tangible 1,4,5.
PECS may also help improve social interactions in children with autism. Because the child is in charge of approaching the communication partner, the child learns how to make the first move. For children with autism, approaching another person socially can be difficult. However, in this case, the child is not expected to speak, so the initial approach may be less intimidating 1,4.
Does it work?
There are several well-designed research studies showing the usefulness of PECS. In one study of 18 preschool children with language delays, some of whom were diagnosed with autism, PECS generalized across communication partners and environments 6. These children were able to use PECS to communicate throughout their school days, not just during the training sessions. Further, almost half of these children stopped using PECS and started using natural speech within a year 6. One parent commented that “PECS turned on the light for communication” in her child 6. Similar results were found for two smaller, but still well-designed studies 5,7.
A larger study of school-aged children found significantly increased use of PECS when adults trained in the use of PECS were in the classroom. The study involved 6 half-days of PECS intervention per month for 5 months. While use of PECS by the children increased, there was no significant increase in verbal language use 8. The children’s use of PECS diminished after classroom visits by the trained adults were stopped 8.
Recently, a comparison was made between PECS and another popular AAC technique, Responsive Education and Prelinguistic Milieu Training (RPMT). The results showed that children with autism trained in PECS were more verbal than those for whom the RPMT approach was used 9. Overall, the evidence supports the use of PECS as a tool for developing natural communication in children with autism, especially when it is taught before the child is six years old 3.
Is it harmful?
There are no known negative effects of PECS. Some parents have been concerned that their child will become dependent on PECS and not move on to develop natural speech. However, this view is not supported by research studies. In fact, there is evidence that children with autism who have learned to use PECS develop speech more quickly than those who have not been trained in PECS (see Does it work?) 2,4.
Cost
The materials used in PECS are relatively inexpensive. A binder for storing PECS pictures can be made from a 3-ring binder. A Velcro™ strip is attached to the front cover to hold the picture(s) currently being used. Each picture can be drawn by a parent, cut out of a magazine, or made from an actual photograph of the object glued onto a card. A Velcro™ strip can be placed on the back of each picture to hold it in place on the front cover of the binder when it is being used. Each picture can be hole-punched for storage in the binder 1.
A more expensive alternative is to purchase a PECS binder and several commonly used pictures (see Resources). However, even if you purchase these ready-to-use PECS systems, you will have to create your own pictures of preferred items that are unique to your child.
The more expensive side of PECS can be the expertise involved in PECS training. However, PECS can be covered in speech therapy under IDEA (see Resources). Also, PECS training manuals are available for $40-70 for parents and other caregivers (see Resources).
Resources
Autism is a condition covered under the Individuals with Disabilities Education Act (IDEA), and PECS Services covered by IDEA include early identification and assessment and speech language pathology (speech therapy). For nonverbal children, this can often include PECS. This law protects the rights of patients with autism and provides guidelines to assist in their education. It covers children from birth to age 21 (U.S. Department of Education Web site). Pediatricians can provide contact information for the state early intervention program (for children 0 to 3 years old). School districts will coordinate special services for children 3-21 years old.
Many PECS resources, including commonly used pictures and PECS binders can be found at: http://www.pecsusa.com/.
Several books that might be helpful in understanding the PECS approach are:
EMPOWER! Book & CD by Beth A. Soeder, M.A., SLP-CCC and Catharine M. Critz, Ph.D., CPNP, 2003.
A Pictures Worth Written by Andy Bondy, Ph.D., and Lori Frost, M.S., CCC/SLP, 2002.
PECS Training Manual, 2nd Edition by Lori Frost, M.S., CCC/SLP and Andy Bondy, Ph.D., 2002.
References

Featured Vendor: Healing Thresholds
Many Thanks to Lara Pullen, PHD, CEO for allowing us to reprint her article which appeared on the Healing Thresholds Website
Lara is a former research scientist in the field of immunology. She has been a medical writer since 1999 and has written on a wide range of topics from Alzheimer’s disease to diabetes. She is the mother of three children, the youngest of whom has Prader-Willi Syndrome.