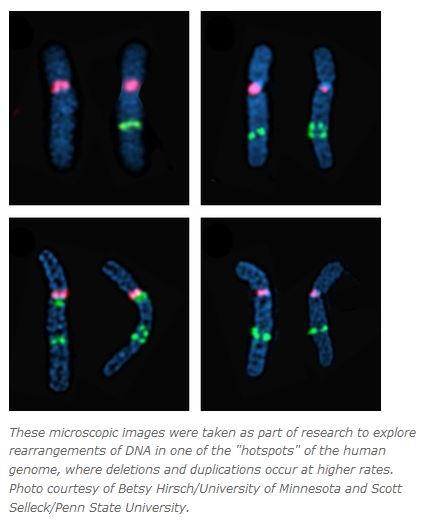 Children with autism have increased levels of genetic change in regions of the genome prone to DNA rearrangements, so called “hotspots,” according to a research discovery to be published in the print edition of the journal Human Molecular Genetics. The research indicates that these genetic changes come in the form of an excess of duplicated DNA segments in hotspot regions and may affect the chances that a child will develop autism — a behavioral disorder that affects about 1 of every 88 children in the United States, according to the Centers for Disease Control.
Earlier work had identified, in children with autism, a greater frequency of rare DNA deletions or duplications, known as DNA copy number changes. These rare and harmful events are found in approximately 5 to 10 percent of cases, raising the question as to what other genetic changes might contribute to the disorders known as autism spectrum disorders.
Read the Rest of this Article on Penn State.edu