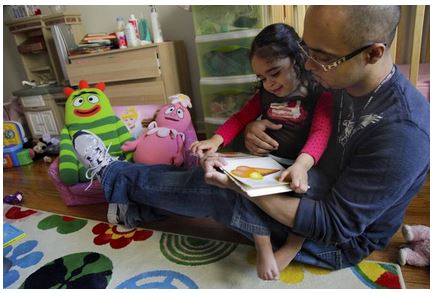 Photo by: Bebeto Matthews:  Christopher Astacio reads with his daughter Cristina, 2, who recently was diagnosed with a mild form of autism, in her bedroom on Wednesday, March 28, 2012, in New York. Autism cases are on the rise again, largely because of wider screening and better diagnosis, federal health officials say. (AP Photo/Bebeto Matthews)
By Cheryl Wetzstein

In a finding researchers are still trying to understand, autism rates in British children appear to have plateaued in the past decade, according to a new study released Wednesday.
These findings differ from U.S. data, which estimate that the prevalence of the disorder is still rising in this country.
The authors of the new study in BMJ Open, an “open-access” medical journal put out by an arm of the British Medical Association, said that it was possible that increased public awareness and expanded diagnoses for autism spectrum disorder (ASD) led to increased diagnoses in the 1990s that are now leveling off.
But the measles-mumps-rubella vaccine, which some have argued is related to increased autism rates, “was surely not the cause,” and “the actual cause remains in large part a mystery,” wrote British pediatrician Brent Taylor, researcher Hershel Jick and systems analyst Dean MacLaughlin of the Boston Collaborative Drug Surveillance Program at Boston University School of Public Health.
Read the Rest of this Article on the Washington Times.com