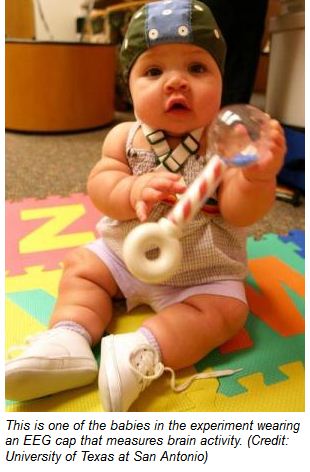 Babies and children are whizzes at learning a second language, but that ability begins to fade as early as their first birthdays.
Researchers at the University of Washington’s Institute for Learning & Brain Sciences are investigating the brain mechanisms that contribute to infants’ prowess at learning languages, with the hope that the findings could boost bilingualism in adults, too.
In a new study, the researchers report that the brains of babies raised in bilingual households show a longer period of being flexible to different languages, especially if they hear a lot of language at home. The researchers also show that the relative amount of each language — English and Spanish — babies were exposed to affected their vocabulary as toddlers.
The study, published online Aug. 17 in Journal of Phonetics, is the first to measure brain activity throughout infancy and relate it to language exposure and speaking ability.
“The bilingual brain is fascinating because it reflects humans’ abilities for flexible thinking — bilingual babies learn that objects and events in the world have two names, and flexibly switch between these labels, giving the brain lots of good exercise,” said Patricia Kuhl, co-author of the study and co-director of the UW’s Institute for Learning & Brain Sciences.
Read the Rest of this Article on Science Daily.com