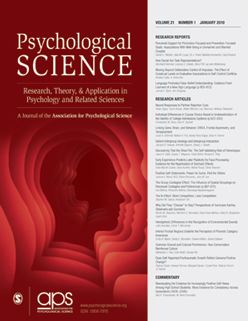 [Science Daily.com]
Children’s sense of having and owning a body differs from that of adults, indicating that our sense of physical self develops over time, according to a new study published in Psychological Science, a journal of the Association for Psychological Science.
Many of our senses — vision, touch, and body orientation — come together to inform our perception of having and owning a body. Psychological scientist Dorothy Cowie of Goldsmiths, University of London and colleagues hypothesized that there might be age differences in how these processes come together. To test this hypothesis, they relied on a well-known sensory illusion called the “rubber-hand illusion.”
In this illusion, the participant sits with their left hand on a table — but hidden from view. Instead of looking at her real left hand, she looks at a fake left hand. The experimenter sits across the table and strokes the participant’s left hand with a paintbrush while also stroking the fake rubber hand. When the paintbrush strokes are matched so that they occur at the same time and in the same place on the two hands, the participant will often feel as if the fake hand is her own, and perceive the touch she feels as arising from the brush she sees stroking the fake hand.
Read the Rest of this Article on Science Daily