Both Chimpanzees and Humans Spontaneously Imitate Each Other’s Actions 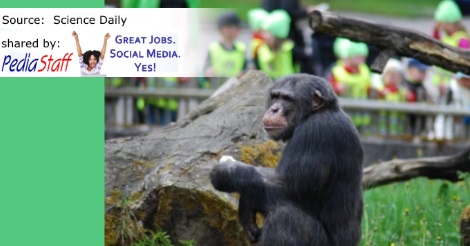 A new study from Lund University, published in the journal Primates, has instead targeted the interactive side of imitation directly, and finds that the divide between humans and chimpanzees is less clear cut. By systematically observing the spontaneous interactions between zoo visitors and chimpanzees at Furuvik Zoo in Sweden, researchers found that both species imitated to a similar extent. About 10% of the actions produced by either species was an imitation of the other species’ actions.

“This took place in a typical zoo setting, where both chimpanzees and visitors tries to attract each other’s interest in various ways. We studied these interactions,” explains Dr. Tomas Persson, one of the researchers who conducted the study.