Challenges for Extreme Preemies Can Last Into Teens 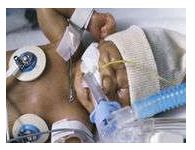 (HealthDay)—The complications and medical treatments that extremely preterm or extremely small newborns experience in their first weeks of life can have an impact years later, a new study reveals.

Preemies who had bleeding in their brain or who received corticosteroids were at particular risk for more difficulty with school or thinking skills, the researchers found, regardless of their environment growing up.
“The most surprising finding was that the effects of events occurring in the nursery had such long-lasting and persistent effects on thinking ability and academic performance, even into late adolescence,” said study author Dr. Lex Doyle. He is a professor of neonatal pediatrics at the Royal Women’s Hospital in Parkville, Victoria, in Australia.
“These events were as important or even more important than the effects of the environment, such as the mother’s education level and social class,” Doyle said. “These findings are contrary to conventional wisdom that the early effects from the newborn nursery would wane, and the environmental effects would dominate as children grow older.”