Communication Made Easier for Children with Cerebral Palsy 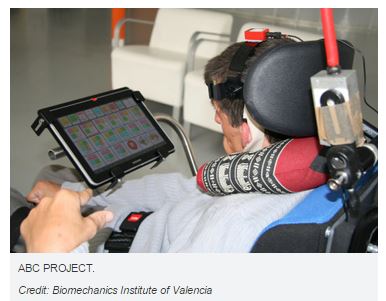 Cerebral palsy affects 1.5 per 1,000 people in Spain, being the first cause of childhood disability. People with Dyskinetic Cerebral Palsy (DCP), 15% of the cases, despite having their intelligence preserved, cannot speak or express themselves because they have no motor control. This means a serious difficulty to establish relations with their environment which hampers the cognitive and emotional development of this group. “Since they cannot express themselves, these children do not connect with other people and end up not developing their intelligence” said Juanma Belda, IBV researcher.
In order to overcome these limitations, “we have developed a functional prototype of the ABC system validated and operational in real life contexts. This is a communication system that offers different interaction modes including a brain-computer interface. As a result of the project we have developed a communicator that is available free of charge for Android tablets” said Juanma Belda.
The ABC communicator is composed of 4 independent modules based on the latest breakthroughs in neural signal processing, computer-assisted alternative communication and monitoring of biosignals.
Read the Rest of this Article on Science Daily