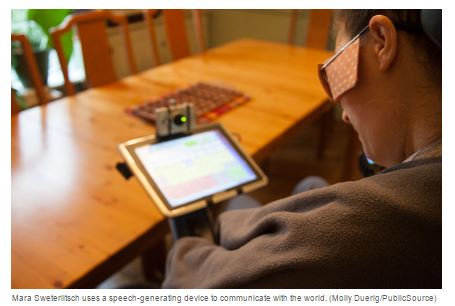 Speech may soon be federally recognized as more than just what happens in a face-to-face conversation after thousands of people with disabilities and their advocates said that communications by phone, text and email are also important.
About a year ago, the Centers for Medicare and Medicaid Services (CMS) made a series of moves to narrow its coverage of speech-generating devices.
All modern forms of communication were casualties of the process.
Protests from individuals with disabilities, advocates, lawmakers and device manufacturers caused the agency to open up a review of the national coverage determination in November.
Nearly 2,300 people submitted comments to the agency about how the changes would affect the lives of people who rely on the devices because of ALS (or Lou Gehrig’s Disease), cerebral palsy, traumatic brain injury, Parkinson’s disease, multiple sclerosis, aphasia and various neurological conditions.
Now, CMS has proposed a new policy for speech-generating devices that expands the definition of speech to include text messaging, email and phone capabilities. The agency states that it believes a written message from a person who cannot speak serves the same purpose as audible speech.
Read the Rest of this Article on Disability Scoop