Feel Good Story of the Week: A Boy’s Life With Cerebral Palsy, Revealed in Tumblr ‘Aaronverse’ 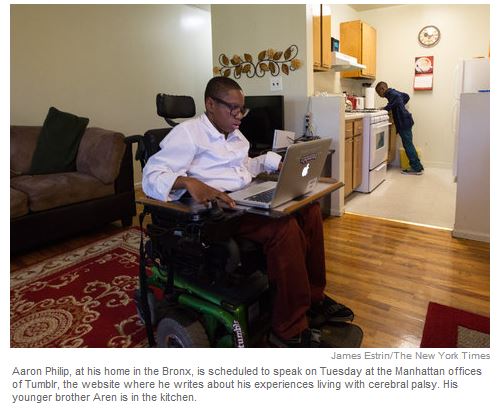 Hidden in Tumblr’s bottomless trove of illustrated quotations, posts debunking falsely attributed illustrated quotations, pornography and obsessively composed photos of huckleberry muffins, is a blog written by a twelve-year-old from the Bronx named Aaron Philip.
The earnest voice of his Tumblr blog, Aaronverse, caught the attention of Tumblr’s 27-year-old chief executive, David Karp. In June, Mr. Karp met with the young blogger at the company’s office in the Flatiron district for an hour and a half, to talk about his blog and his life with cerebral palsy.
As the meeting drew to a close, Mr. Karp clicked through Aaron’s Tumblr site and asked, “Do you like public speaking?”
Aaron answered, “No, not really.” At school, being on stage had been humiliating for him. “One time, during a class dance performance at school, we went over, ‘Make sure, at the end of the dance, Aaron gets wheeled with you guys offstage.’ The teacher went over that again and again. But the dance performance ended. No one wheeled me off. I got left on stage,” he said.
Read the Rest of this story on the New York Times, City Room blog