From Time.com: Girls on the Spectrum: Q&A with the Author of Aspergirls 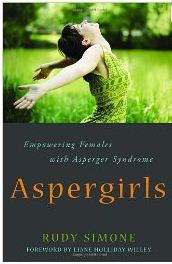 [Source: Healthland/Time.com]
Is Asperger syndrome really less common in girls and women, or are females just better than males at masking autistic symptoms?

Rudy Simone, a San Francisco singer, writer and stand-up comic, didn’t learn that she was on the autism spectrum until her mid-40s. Simone has Asperger syndrome — a high-functioning form of autism that leads to social problems but no intellectual disabilities — which, like all forms of autism, appear much more commonly in boys than in girls. Ten times more men are believed to reside on the spectrum than women.
But some experts think the real prevalence of Asperger’s in girls may be much higher than believed, because girls tend to be far better than boys at concealing its symptoms, masking social problems and hiding the repetitive behaviors often associated with autism. So, many women go undiagnosed until middle age, along the way given other labels and therapies that do not address their real issues.
Read the Rest of this Article on Healthland/Time.com