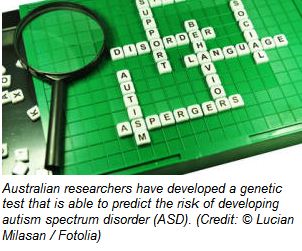 A team of Australian researchers, led by University of Melbourne has developed a genetic test that is able to predict the risk of developing autism spectrum disorder (ASD).
Lead researcher Professor Stan Skafidas, Director of the Centre for Neural Engineering at the University of Melbourne said the test could be used to assess the risk for developing the disorder. “This test could assist in the early detection of the condition in babies and children and help in the early management of those who become diagnosed,” he said. “It would be particularly relevant for families who have a history of autism or related conditions such as Asperger’s syndrome,” he said.
Autism affects around one in 150 births and is characterized by abnormal social interaction, impaired communication and repetitive behaviours. The test correctly predicted ASD with more than 70 per cent accuracy in people of central European descent. Ongoing validation tests are continuing including the development of accurate testing for other ethnic groups.
Read the Rest of this Article on Science Daily.com