Improving Babies' Language Skills Before They're Even Old Enough to Speak 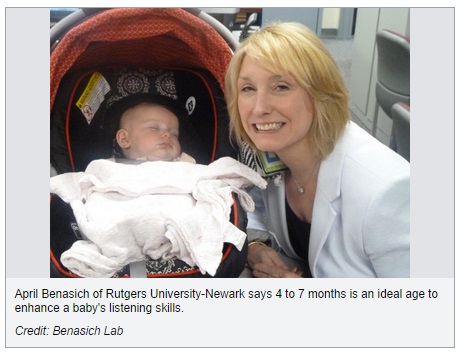 In  the first months of life, when babies begin to distinguish sounds that make up language from all the other sounds in the world, they can be trained to more effectively recognize which sounds “might” be language, accelerating the development of the brain maps which are critical to language acquisition and processing, according to new Rutgers research.

The study by April Benasich and colleagues of Rutgers University-Newark is published in the October 1 issue of the Journal of Neuroscience. The researchers found that when 4-month-old babies learned to pay attention to increasingly complex non-language audio patterns and were rewarded for correctly shifting their eyes to a video reward when the sound changed slightly, their brain scans at 7 months old showed they were faster and more accurate at detecting other sounds important to language than babies who had not been exposed to the sound patterns.
“Young babies are constantly scanning the environment to identify sounds that might be language,” says Benasich, who directs the Infancy Studies Laboratory at the University’s Center for Molecular and Behavioral Neuroscience. “This is one of their key jobs — as between 4 and 7 months of age they are setting up their pre-linguistic acoustic maps. We gently guided the babies’ brains to focus on the sensory inputs which are most meaningful to the formation of these maps.”
Read the Rest of this Article on Science Daily