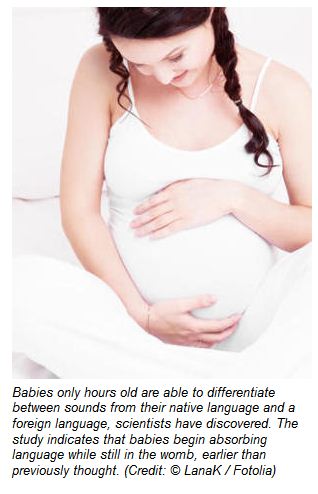 Newborns are much more attuned to the sounds of their native language than first thought. In fact, these linguistic whizzes can up pick on distinctive sounds of their mother tongue while in utero, a new study has concluded.
Research led by Christine Moon, a professor of psychology at Pacific Lutheran University, shows that infants, only hours old showed marked interest for the vowels of a language that was not their mother tongue.
“We have known for over 30 years that we begin learning prenatally about voices by listening to the sound of our mother talking,” Moon said. “This is the first study that shows we learn about the particular speech sounds of our mother’s language before we are born.”
Before the study, the general consensus was that infants learned about the small parts of speech, the vowels and the consonants, postnatally. Moon added. “This study moves the measurable result of experience with individual speech sounds from six months of age to before birth,” she said. The findings will be published in Acta Paediatrica in late December.
Read the Rest of this Article on Science Daily