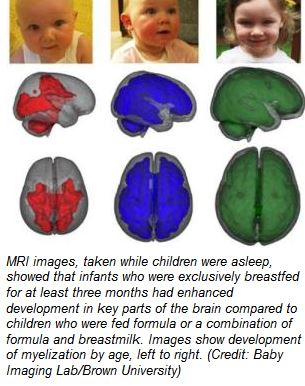 A study using brain images from “quiet” MRI machines adds to the growing body of evidence that breastfeeding improves brain development in infants. Breastfeeding alone produced better brain development than a combination of breastfeeding and formula, which produced better development than formula alone.
A new study by researchers from Brown University finds more evidence that breastfeeding is good for babies’ brains.
The study made use of specialized, baby-friendly magnetic resonance imaging (MRI) to look at the brain growth in a sample of children under the age of 4. The research found that by age 2, babies who had been breastfed exclusively for at least three months had enhanced development in key parts of the brain compared to children who were fed formula exclusively or who were fed a combination of formula and breastmilk. The extra growth was most pronounced in parts of the brain associated with language, emotional function, and cognition, the research showed.
Read the Rest of this Article on Science Daily