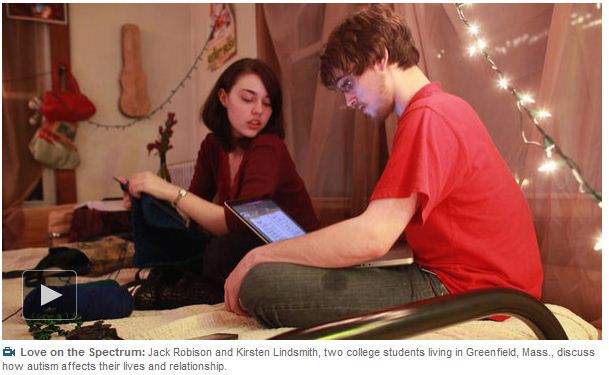 GREENFIELD, Mass. — The first night they slept entwined on his futon, Jack Robison, 19, who had since childhood thought of himself as “not like the other humans,” regarded Kirsten Lindsmith with undisguised tenderness. She was the only girl to have ever asked questions about his obsessive interests — chemistry, libertarian politics, the small drone aircraft he was building in his kitchen — as though she actually cared to hear his answer. To Jack, who has a form of autism called Asperger syndrome, her mind was uncannily like his. She was also, he thought, beautiful.
So far they had only cuddled; Jack, who had dropped out of high school but was acing organic chemistry in continuing education classes, had hopes for something more. Yet when she smiled at him the next morning, her lips seeking his, he turned away.
Read the Rest of this Article and Watch the Video on New York Times.com