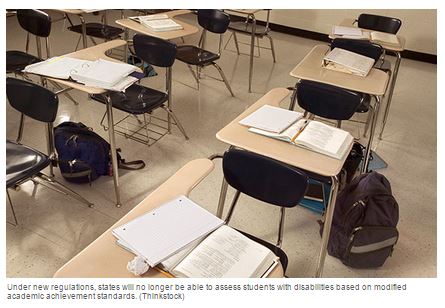 The U.S. Department of Education is doing away with a policy that allowed states to consider some students with disabilities academically proficient without meeting grade-level standards.
The agency said in a final rule published late last week in the Federal Register that states will no longer be allowed to administer tests to students with disabilities that are based on modified academic achievement standards.
Previously, states could count up to 2 percent of their students as proficient under the No Child Left Behind Act for taking such exams. But now the Education Department is saying no more to the policy known as the “2 percent rule.”
“We believe that the removal of the authority for states to define modified academic achievement standards and to administer assessments based on those standards is necessary to ensure that students with disabilities are held to the same high standards as their non-disabled peers,” the agency said in the rule, which will officially take effect Sept. 21.